Time may have been dragging a bit for you during lockdown, but we're already at Pentecost, this Sunday. It's time to celebrate the coming of the Holy Spirit.

Unlike deadly viruses, the Holy Spirit brings life and joy and health... and waits to be invited into our hearts and lives. Its 'R' number (reproduction rate) is staggeringly high, as the good news of Jesus Christ is enthusiastically shared far and wide. The Holy Spirit is powerful but invisible. The Book of Acts finds it hard to fully describe the coming of the Spirit to the followers of Jesus in Jerusalem at the first Christian Pentecost. It's like the sound of a mighty rushing wind and like tongues of flame. But, not exactly.

Ultimately, like the wind, you can't see the Holy Spirit directly, you can only experience its effects. For the first Christians there was no mistaking that they had been affected by, and transformed by, a powerful force for good! You could see it in their lives, in the gifts and the fruit of the Spirit that they showed.

This week I want to share with you a special video presentation on the Fruit of the Spirit, originally produced last summer for an innovative service at Carshalton. The service was called 'Worshipping with Photos' and during it we used photos taken by members of the congregation, projected onto the large community-cinema screen in the Ruskin Hall. The idea was to have lots to engage our sight, as well as our hearing, to give an extra dimension to our service. We live in a very visual culture and this was one way of making our worship more accessible. Nearly a year on, we needed to replace some of the photos in the video, now it will be having a wider airing, so you will notice that a few of the images have been taken during lockdown, with proper social distancing, of course. The video has a beautiful accompaniment on the saxophone by Vijendran from Wallington church.

I hope you enjoy viewing this short video, as we celebrate, on Pentecost Sunday, the coming of the Spirit, with nine-a-day fruits, not just five-a-day! If you like it, why not share it with your friends...


Sorry, if the video is not displaying properly on mobile devices. We have been trying to fix this. For the time being, try enabling your phone's 'auto rotate' function and then turn your phone so that the video fits the screen - on Android, go to Settings/Accessibility/& switch on Auto-rotate screen.


We were out for our daily walk the other day and Philip pointed out the vapour trail of a plane – something we hadn’t seen for ages. Having had quiet skies during lockdown, (with some blessings over carbon emissions) seeing the evidence of a plane was unusual, whereas it once had been commonplace.

With children, seeing a plane or helicopter in the sky has always been a cause for excitement. One of my earliest memories is sleeping over at my grandparents’ house in Barnes and hearing planes going over at regular intervals. Sometimes I would creep out of bed as quietly as I could, just to peek through the curtains. When we lived in Wiltshire we would hear the police helicopter circling round fairly often at night, and again I would go to the window and look through the curtains to catch a glimpse of it. As hospital chaplain, everybody would stop and watch when the air ambulance arrived or took off from the field, whereas an ordinary ambulance caused not a stir as it went by.

So the other day, on hearing a helicopter outside, I dashed out into the garden to catch a glimpse. Something in the air is still somehow a marvel and creates excitement, and causes you to look up and out.

I am not very often up in the air, but I know that from above you can see clearly over a whole area. There is a different perspective on the world. Emergency helicopters – be it coastguard, police, mountain rescue or air ambulance – can survey a scene in moments and take it in. It could take you hours on the ground to pinpoint someone lost on a mountain, or injured on a cliff, or drifting out to sea, or running and hiding from a crime scene, but from the air things are much more visible and you can see the world around. It enables you to get to the heart of a situation very quickly. 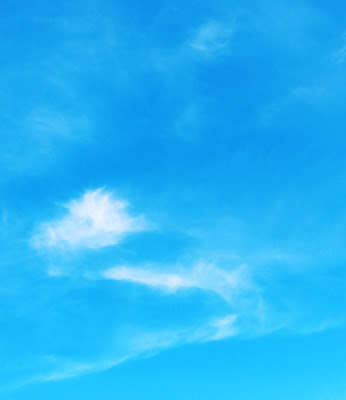 I was thinking about all this because on Thursday it was Ascension Day. The Ascension is quite a difficult notion. There are two references to it in the Bible in the Lukan material – Luke’s gospel (Luke 24 vv 50ff) and Acts (Acts 1 vv 8 – 11). Heaven, the sky and a cloud hiding Jesus from sight are mentioned, and an upwards trajectory.

The picture we get is of Jesus disappearing into the heavens above the clouds, which on the face of it, seems quite difficult for a 21st century person to take in. But this is the language of faith and poetry – an attempt to explain the inexplicable!

We consistently picture heaven as ‘up’. Looking up into the sky we look beyond our earth-bound horizons. Perhaps we catch sight of planes flying to far countries or we marvel with the psalmist at: the moon and the stars, which you have set in place (Psalm 8). It is exciting, mysterious, and beyond our control. We love to look up into the sky to extend our thoughts and world. It’s true that a popular cartoon notion of heaven is of someone sitting on a cloud, perhaps with a harp and wings, but heaven is not about fluffy clouds and sky, as other people picture our beliefs.

Recently I heard heaven described as ‘God’s space’ and earth as ‘our space’. Thanks to Jesus, the two spaces are already overlapping. I like that idea of God’s space and our space, and of Jesus moving from one to the other to bring the two together. As an old Christmas carol, ‘Cradled in a manger meanly’, reminds us, ‘it is heaven where thou art’. There’s also a challenge for us to play our part in bringing our space and God’s space together, so that, in the words of the Lord’s Prayer, ‘thy will be done on earth as it is in heaven.’

One thing we know about the ascended Jesus is that he is no longer held by the boundaries we have here. He has full view over us all, and sees when we are lost, or hurting, or drifting, or hiding. Jesus Christ knows the heart of our situation and he is praying for us, waiting for us to turn to him to guide us, waiting for us to want to enter God’s space and so he can help us make it our own. We need the risen, ascended Christ’s perspective in our lives.

One of the things COVID 19 is going to make us reassess is air travel and our attitudes to it. But in our faith we need to be asking ourselves where our inspiration comes from.

Is the sky the limit? Or is it ‘to infinity and beyond’?!


Why not share some comments and reflections in the 'Comments' box below. We'd love to hear from you and maybe set off some discussion...